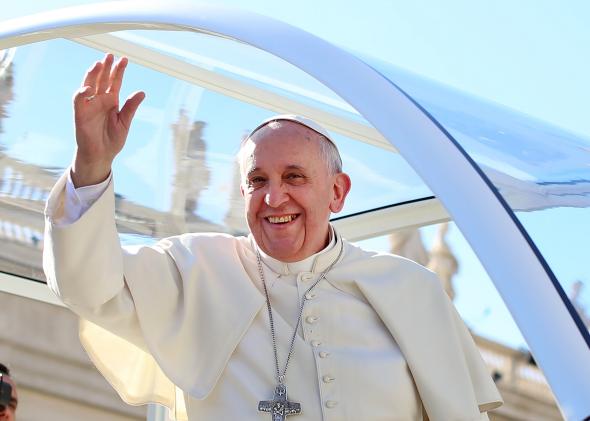 POPE FRANCIS IS THE MOST COMMANDING FIGURE OF 2014

After a thorough periscope into the year 2014 , The Afrika Market editorial board and its media affiliates picks the first Jesuit to lead the Roman Catholic church as the most commanding figure in 2014 . He established himself with the message of peace, love , faith , tolerance and unity . He is more human and compassionate than any pope in history .

One of the legacy of the Jeshuit Pope was the  turning point in United States of America Bilateral relationship with Cuba , one of the most resounding peace accord in resent times . We can  recalled the battered image of the catholic church in the past which makes the job of pope francis an herculean task .

Pope francis is the enigma reflector  of the Vatican resurgence that reflects the  jeshuite nature of  catholic church world wide.

Pope Francis ; Until 13 March, he was Cardinal Jorge Mario Bergoglio of Buenos Aires.

Most theologian and commentators did not see him as a favourite for the job of succeeding Benedict XVI, and his advanced age – at 76, he is just two years younger than Benedict at the time of his election in 2005 – may have surprised those expecting a younger man as the 266th Pope.

However he appeals to both Church conservatives and reformers, being seen as orthodox on sexual matters, for instance, but liberal on social justice – though far from being a “liberation theologist”.

He was born on 17 December 1936 in Buenos Aires, of Italian descent.

According to his official Vatican biography, he was ordained as a Jesuit in 1969 and went on to study in Argentina and Germany.

As a young man he had a lung removed because of an infection, but his health is currently said to be good.

His election took many by surprise in his home city, where many had thought his age ruled him out, says the BBC’s Marcia Carmo in Buenos Aires.

But any surprise soon gave way to the jubilant blaring of car horns on the streets.

As Cardinal Bergoglio, his sermons always had an impact in Argentina and he often stressed social inclusion, indirectly criticizing governments that did not pay attention to those on the margins of society, our correspondent says.

Francesca Ambrogetti, who co-authored a biography of him, told Reuters news agency that part of his public appeal lay in his “sober and austere” humble lifestyle.

In Buenos Aires, he lived in a simple flat. When in Rome, he often preferred to keep his black robe on and is also said to have re-used the cardinal’s vest used by his predecessor. 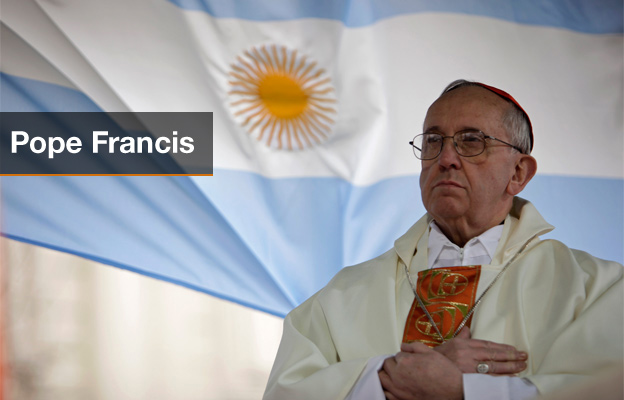 From a humble background in Argentina, Jorge Mario Bergoglio has risen to the head of the Roman Catholic Church as Pope Francis. We look at key moments in his life and career so far.
Uncompromising’ stance

For the Church establishment, it is a novelty to have a Jesuit in charge – members are supposed to avoid ecclesiastical honours and serve the Pope himself.

As a Jesuit, he is a member of perhaps the most powerful and experienced religious order of the Catholic Church, who are known as expert communicators, writes David Willey.

It appears that few who know him doubt his conservative credentials.

This is how Monsignor Osvaldo Musto, who was at seminary with him, described him in a BBC News article back in 2005: “He’s as uncompromising as Pope John Paul II, in terms of the principles of the Church – everything it has defended regarding euthanasia, the death penalty, abortion, the right to life, human rights, celibacy of priests.”

His views have been put to the test in Argentina, the first Latin American country to legalise same-sex marriage with a President, Cristina Fernandez de Kirchner, who promotes free contraception and artificial insemination.

When he argued that gay adoptions discriminated against children, the president said his tone harked back to “medieval times and the Inquisition”.

However she welcomed the election to the papacy of a fellow countryman, noting his choice of name appeared to be “in reference to St Francis of Assisi, the saint of the poor” and boded well for unifying “all humans as equal, with fellowship, with love, with justice and equity”.

Aside from his universal significance, the former cardinal appears to be a strong Argentine patriot, telling Argentine veterans of the Falklands War at a Mass last year: “We come to pray for all who have fallen, sons of the Homeland who went out to defend their mother, the Homeland, and to reclaim what is theirs.”

One subject of controversy is his role under the Argentine military dictatorship of 1976-1983, when he led the country’s Jesuits.

He was accused of effectively delivering two fellow priests into the hands of the military authorities in 1976 by declining to publicly endorse their social work in the slums of Buenos Aires, which infuriated the junta at the time, the BBC’s Vladimir Hernandez reports.

Another accusation levelled against him from the “Dirty War” era is that he failed to follow up a request to help find the baby of a woman kidnapped when five months’ pregnant and killed in 1977. It is believed the baby was illegally adopted. 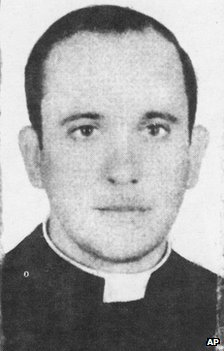 Jorge Mario Bergoglio as a priest in 1973

The Vatican strenuously denies Pope Francis was guilty of any wrongdoing under the Junta.

It has now emerged that in 2011 he took initial steps towards beatifying Argentine priests murdered under military rule.

In 1976, Franciscan priests Carlos de Dios Murias and Gabriel Longueville, who was French, were killed after confronting local leaders in the western province of La Rioja.

Cardinal Bergoglio approved the beatification cause for both priests and a lay church worker, who was also found dead days later.

“Bergoglio signed it and warned us to be discreet, saying that many Argentine bishops, especially older ones, were against causes based on social engagement,” the head of the Franciscan order in Argentina and Uruguay, Carlos Trovarelli, told Italian newspaper La Stampa.

“Thanks to his caution, the process moved forward,” he added.

In a separate case, he also put forward for sainthood five Catholic churchmen who were killed at the St Patrick church in Buenos Aires also in 1976.

Adolfo Perez Esquivel, a human rights activist at the time who was jailed and tortured by the regime, told BBC News: “There were some bishops who were in collusion with the military, but Bergoglio is not one of them.”

“We live in the most unequal part of the world, which has grown the most yet reduced misery the least,” he was quoted as saying by the National Catholic Reporter at a gathering of Latin American bishops in 2007.

Since becoming pope, he has continued to put his concern about economic inequality at the forefront of his message.

In Evangelii Gaudium (The Joy of the Gospel), the first major work he has written since he became Pope, he says “the worship of the ancient golden calf… has returned in a new and ruthless guise in the idolatry of money and the dictatorship of an impersonal economy”.

The document also suggests Pope Francis is planning radical reforms to the Vatican bureaucracy, another theme that has gained prominence in his papacy.

He has put together a team of eight cardinals from outside the Holy See’s administration who will look at ways to reshape the bureaucracy.

He has also adopted a markedly less formal tone than his predecessor, underlining his reputation for simplicity and humility.

While marking that the core of Catholic doctrine on sexuality is not up for negotiation, he has said the Church has been too focused on enforcing the rules for human behaviour.

Speaking to reporters in July, he responded to rumours of a “gay lobby” in the Vatican by denying its existence, but added: “If a person is gay and seeks God and has good will, who am I to judge?”

And in an unprecedented move, he has ordered a survey to be conducted of lay Catholics’ opinions on Church teachings on sexual ethics and family life.

Pontiff challenges European leaders to defend dignity of the most vulnerable

“In the end, what kind of dignity is there without the possibility of freely expressing one’s thought or professing one’s religious faith? What dignity can there be without a clear juridical framework which limits the rule of force and enables the rule of law to prevail over the power of tyranny? What dignity can men and women ever enjoy if they are subjected to all types of discrimination? What dignity can a person ever hope to find when he or she lacks food and the bare essentials for survival and, worse yet, when they lack the work which confers dignity?

Promoting the dignity of the person means recognizing that he or she possesses inalienable rights which no one may take away arbitrarily, much less for the sake of economic interests.”-  Extras of Pope francis message to European Parliament

Pope Francis on global warming – its time to take action ;

We are not in a position to delay any longer. The effects of global warming are profound and dangerous, threatening our civilization. And they’re happening now. Not in some nebulous future. Now.

In many ways, this Pope has proven to be very forward-thinking. I welcome his words to take action.

Pope Francis is urging Muslim leaders worldwide to “clearly” condemn terrorism carried out in the name of Islam.

Taking away the peace of a people, committing every act of violence, or consenting to such acts, especially when directed against the weakest and defenceless, is a profoundly grave sin against God.