Waves For Change: How Surf Therapy is Helping South Africa’s Most Deprived Children 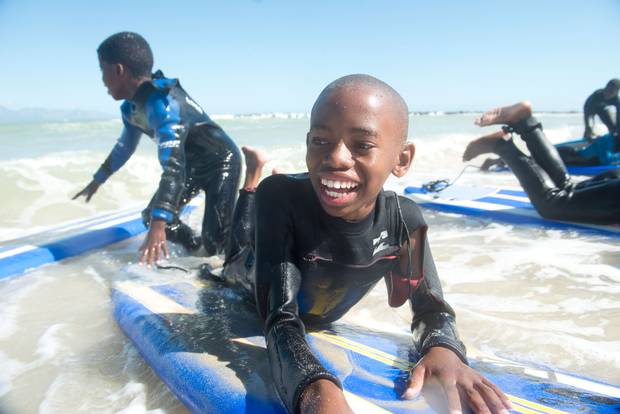 Many of the children growing up amid disorder and violence in some of Cape Town’s most deprived areas can’t even swim. So what’s one Brit expat doing taking them into the surf? Lena Corner reports
LENA CORNER
When Tim Conibear signed up for an internship at a South African vineyard shortly after graduating from Bristol University, he quickly realised he wouldn’t be learning much about the wine trade beyond how to scrub the floor. So the young Englishman decided to make the most of another of South Africa’s famous virtues – the surf. Every spare moment, he would grab his board and head for Muizenberg, a wide suburban beach on the western side of False Bay in Cape Town, considered by many to be the birthplace of surfing in South Africa.

Occasionally, a couple of kids from the local townships would tag along – sons and daughters of the labourers who were doing the hard graft alongside him at the vineyard. “I’d stick the kids in the back of a crappy old car I’d borrowed and drive them out to the beach,” says Conibear. “Muizenberg may be one of the most [racially] integrated beaches in South Africa, but children from the townships don’t get to go.”

Aphelele Sikaji learning to surf at Monwabisi (Hannah Maule Ffinch)
One of those kids was Sean, who was around 14 at the time. He was born in Nyanga, one of the oldest, poorest and most violent townships in Cape Town. Chaos had dominated his short life. After his dad walked out, Sean’s elder brother left school and turned to crime to help feed the family. One day, as they sat watching TV together, a group of gunmen entered their shack and shot and killed Sean’s brother at point-blank range.

Sean struggled to come to terms with his brother’s murder. He started dabbling in “tik” – South Africa’s low-grade crystal meth. He quickly became addicted and was eventually kicked out of school. “When I met Sean, it all felt so helpless,” says Conibear. “There was nothing for him. In surfing, he found a space to breathe. In me, he found a supporter.”

Each weekend, more kids just like Sean would turn up at Conibear’s door. Unwittingly, he seemed to have reached into the depths of the most dysfunctional parts of South Africa and given the kids there something to cling to. This merry band of surfers soon outgrew the borrowed car, and Conibear persuaded a vehicle-hire company to donate an old van which was about to be scrapped. He cut off its roof so even more kids could squeeze inside. “They kept coming,” says Conibear. “More and more kids would turn up each weekend. There was nothing like this for them in the townships. Nothing.”

Meles Zenawi’s Legacy For The Horn of Africa

One Nation: What We Can All Do to Save America’s Future by Ben Carson M.D. (Author), Candy Carson (Author)