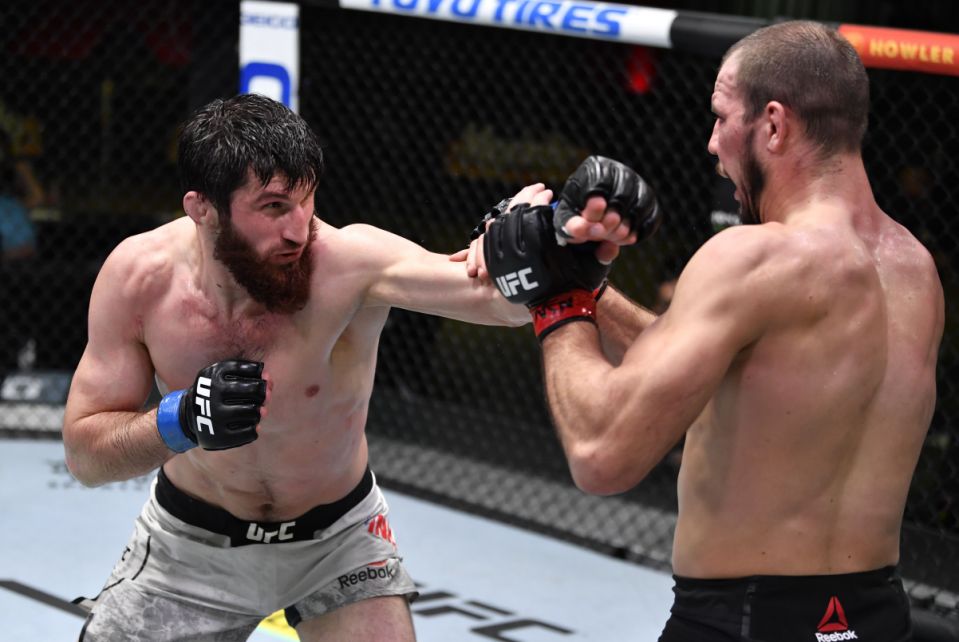 The UFC’s final event of February took place Saturday with UFC Fight Night 186 at the UFC Apex in Las Vegas.

https://www.youtube.com/watch?v=3ageJtyp0yU Gane’s five-fight UFC winning streak at heavyweight is the longest active streak in the division. Rozenstruik suffered the first decision loss of his career.

https://www.youtube.com/watch?v=6rq2paGdomc [autotag]Magomed Ankalaev[/autotag]’s (15-1 MMA, 6-1 UFC) six-fight UFC winning streak at light heavyweight is the longest active streak in the division. [autotag]Nikita Krylov[/autotag] (26-8 MMA, 8-6 UFC) fell to 2-3 since he returned to the UFC for a second stint in September 2018. Krylov fell to 10-6 since he dropped to the light heavyweight division in March 2014.

https://www.youtube.com/watch?v=Pd1jTKHpwgc [autotag]Thiago Moises[/autotag] (15-4 MMA, 4-2 UFC) has earned three of his four UFC victories by decision. [autotag]Alexander Hernandez[/autotag] (12-4 MMA, 4-3 UFC) Hernandez fell to 2-3 in his past five fights dating back to January 2019.

https://www.youtube.com/watch?v=egHKHE8N2oo [autotag]Alexis Davis[/autotag] (20-10 MMA, 7-5 UFC) snapped her three-fight losing skid for her first victory since December 2017. Davis was successful in her return to the UFC women’s bantamweight division. She’s 6-2 in the weight class overall under the UFC banner. Davis’ six victories in UFC women’s bantamweight competition are tied for third most in divisional history behind Amanda Nunes (11) and Raquel Pennington (eight). Davis has earned six of her seven UFC victories by decision. [autotag]Sabina Mazo[/autotag] ((9-2 MMA, 3-2 UFC) was unsuccessful in her UFC women’s bantamweight debut. Mazo has suffered both of her career losses by decision.

https://www.youtube.com/watch?v=GzgDQs7QYlw [autotag]Vince Cachero[/autotag] (7-4 MMA, 0-1 UFC) fell to 1-4 in his past five fights dating back to March 2019. Cachero has suffered three of his four career losses by decision.