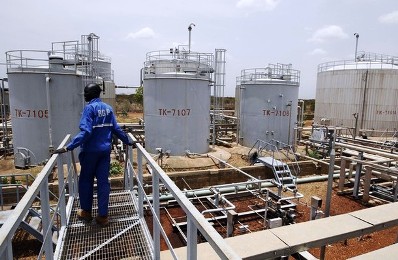 The Ever Given refloating rumours that swept Asia yesterday were quickly quashed but could not stop oil giving back much of the previous day’s recovery. The Covid-19 situation in Europe and potentially India, along with a dearth of Asian buyers, saw Brent crude tumble 3.65% to USD61.80 a barrel. Meanwhile, WTI fell 3.85% to USD58.50 a barrel.

Reuters reported yesterday that Asian importers had been content to take oil out of storage rather than purchase shipments overseas, coinciding with refinery maintenance season, notably in China. The dip overnight, though, appears to have flushed some interest out, with Brent crude and WTI both rising by over 1.0% in Asian trade. Compared with the falls overnight, the retracement is modest, merely moving oil into the middle of the week’s trading range.

Despite the impressive volatility and trading ranges, oil markets have moved into consolidation mode ahead of the OPEC+ meeting on Apr. 1 next week. It is highly unlikely that OPEC+ will change their production targets with prices looking so vulnerable, especially as the futures curves’ backwardation has disappeared. That will weigh more heavily on OPEC+ thoughts than anything.

Oil prices appear to be capped by the Europe Covid-19 situation while supported by the Suez Canal blockage and bargain hunters on the dips. The net result is a very wide and choppy range, but a range it is. Markets do look more nervous about the downside, though, and if the Ever Given suddenly floats, oil prices most likely will not. A deeper correction lower ahead of OPEC+ next week cannot be ruled out.

In its quiet corner of the market, gold continues to consolidate as it attempts to form a longer-term bottom in prices, which should signal a direction rally in the month ahead. Despite a stronger US dollar, gold fell only 0.45% to USD1727.00 overnight, holding above support at USD1720.00 an ounce. It has eased to USD1724.00 an ounce in Asia.

Gold’s overall price action remains construction, though, and the yellow metal is attempting to form a longer-term base, between its 61.80% and 50.0% Fibonacci retracements, setting the scene for a move back above USD1800.00 an ounce if all goes to plan.

Airtel To Sells Its 3,100 Towers In Four African Countries