THE PRIDE OF SCOTLAND ; ALEX SALMOND GRACIOUS IN DEFEAT ! BOWED OUT 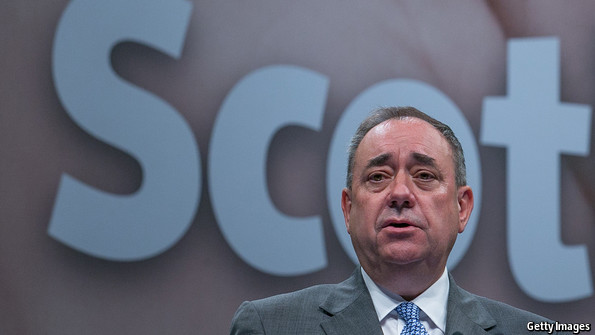 The name Alex Salmond will not go away soon , history will re-write his name in dignified and respectful manner , he is amiable, civil and a pragmatic democrats. This man indeed the whole scottish and todays nationalist will take a leap of hope from this enigma , dogged revolutionist has written his name in the sands of time for all democrats of the world and in ages to come his words will rekindle tomorrows generation of Scotland- “Dream Never dies, I have work all my adult life for Today, am overwhelmed  with over 1million Scottish that came out to vote… Thank You, am humbled .. scotland independence never dies”. Just lack the last knight in defeat , he was gracious and call it a blue cloud . He deserve to be a Knight – “If the queen wants to magnanimous enough in her royalty”

WHEN Alex Salmond stood down after a decade as leader of the secessionist Scottish National Party (SNP) in 2000, he left a modest legacy. The Labour Party dominated Scottish politics. Independence seemed extremely improbable. The SNP was riven by infighting. The Telegraph pointed to his “lacklustre performances” and noted that he appeared to have “lost his appetite for front-line politics.”

It was in his words “with a degree of surprise and humility, but with a renewed determination” that he returned in 2004, having previously ruled out doing so. This afternoon, again after ten years at the SNP’s helm, he resigned once more from the post. But this time he did so as first minister of Scotland, the architect of the first ever majority in the Scottish Parliament, the man who smashed Labour’s dominance at Holyrood and who almost precipitated the break-up of the 307-year-old United Kingdom, he has earned his reputation as one of the biggest characters and canniest operators in early-21st century British politics.

Sure enough, in his resignation statement Mr Salmond hailed the achievements of the pro-independence Yes campaign in Scotland’s referendum, in which Scots yesterday voted by 55% to 45% to remain in the union. “We now have the opportunity to hold Westminster’s feet to the fire on the ‘vow’ that they have made to devolve further meaningful power to Scotland,” he explained in reference to unionist promises made during the campaign. He concluded: “I believe that in this new exciting situation, redolent with possibility, party, parliament and country would benefit from new leadership.”

If Mr Salmond leaves the nationalist movement larger and more prominent than ever before, he also bequeaths an uncertain future and unresolved tensions. Many in it were privately critical of the SNP’s role in the Yes campaign. It failed to think through fundamental issues, like which currency an independent Scotland would use, until much too late in the game. It wasted time and effort bickering over the merits of NATO membership. For the first months of the campaign, it did little to build a coherent and organised Yes operation.

That the Yes side went on to give the unionists a run for their money was thanks to the intervention of various civil society and other non-SNP forces. These—Common Weal, Women for Independence, Radical Independence, National Collective and others—brought verve and energy to the cause. Not bound by the discipline of the pro-union campaign, they could each make a different pitch to different sorts of voters. Students queuing for the cinema were given leaflets explaining “how to disarm a nuke” (the answer: vote Yes to force Britain’s deterrent from Scottish waters). Parents waiting at school gates got literature on childcare. Flats in blue-collar areas received fliers outlining the many ways in which the union had failed them, entitled: “Britain is for the rich. Scotland can be ours.” By the final weeks before yesterday’s referendum the SNP was relatively peripheral, particularly in areas of Scotland like Glasgow and Dundee where Yes was strongest.

The aftermath of the referendum into which the Yes campaign and, until his resignation statement, Mr Salmond were today thrust is therefore fractious. What now for this sprawling political patchwork? A large, leftist part of the movement is at best indifferent towards the SNP and at worst furious at its complacency and poor organisation. Senior figures from this scene were preparing to denounce the first minister in the coming days. Some alleged that Nicola Sturgeon, his more left-wing deputy, had made it known that she shared their gripes. Did he jump, or was he pushed?

Perhaps Ms Sturgeon, who will surely replace Mr Salmond when he formally steps down at the SNP’s conference in November, will be able to draw the wider left-wing movement into the party. She is probably better-placed to do so than he would have been. But your correspondent would not be surprised if instead the movement split. The SNP is a small-c conservative party, with traditions and image to match. Can it really accommodate the thousands of environmentalists, socialists, trade unionists, students, single-issue campaigners and others who poured time and energy into the Yes campaign? Their commitment to the cause will not go away overnight, or even over a period of months. This evening the emergence of new, left-wing nationalist party seems possible; maybe even probable.

Until the results of last night, Scottish nationalism under Mr Salmond was more powerful and concerted (on the surface, at least) than it has been in living memory. Soon that may seem like a long, long time ago.

Nelson Mandela: Life Of A Famous Campaigner Against Aids