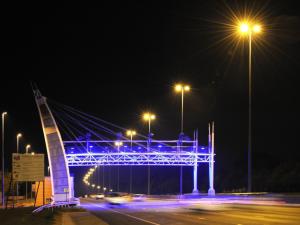 E-tolls are the most viable way of funding the improvement of Gauteng freeways, says economist Roelof Botha.

He also indicated that his conclusion was based on an independent research study he conducted, following on a previous study on behalf of the Gauteng provincial government on the economic benefits of roads.

According to Botha, his research focused on the economic value of time as a result of the easing of traffic congestion.

He added that his findings showed that users reaped significant economic benefits and that his methodology was verifiable and quantifiable – for every one rand spent on e-tolls, 13.70 rand is saved in time, for the average user travelling in a light vehicle.

“I am in favour of e-tolls. Our roads need to be urgently improved, and quite honestly our government does not have the money to do that,” he said.

Botha, who stated this before the E-toll Panel Review Panel on Wednesday, went on to say that the truth is that most of the roads in Gauteng would not have been improved had it not been for the user-pays funding model.

He also said that he was perplexed by people who rejected e-tolls because their understanding was fundamentally flawed and did not take broader economic issues into consideration.

Botha identified several primary e-tolling benefits, including the creation of a situation whereby SANRAL was enabled to secure an international credit rating and to raise loans for purposes of engaging in private-public partnerships.

“E-tolling is therefore the most viable route to follow. The resulting advantages included the timely completion of a mega-infrastructure project,” he indicated.

Botha emphasised the fact that these achievements had been based on the concept of user charges, which he regarded as a “sound fiscal principle”.

Botha added that the progressive revenue impact was particularly advantageous, stating that the incidence fell mainly on the highest income quintile.

“Significantly, a fuel levy increase would impact most negatively on the poorer groups. In this context bear in mind that that it is the highest income quintile that pay 94 per cent of e-tolls for passenger cars. Equally significant is the fact that public transport is exempt from e-tolls,” he stated.

Maritime Security Likely To Be Hot Topic At India-Africa Summit