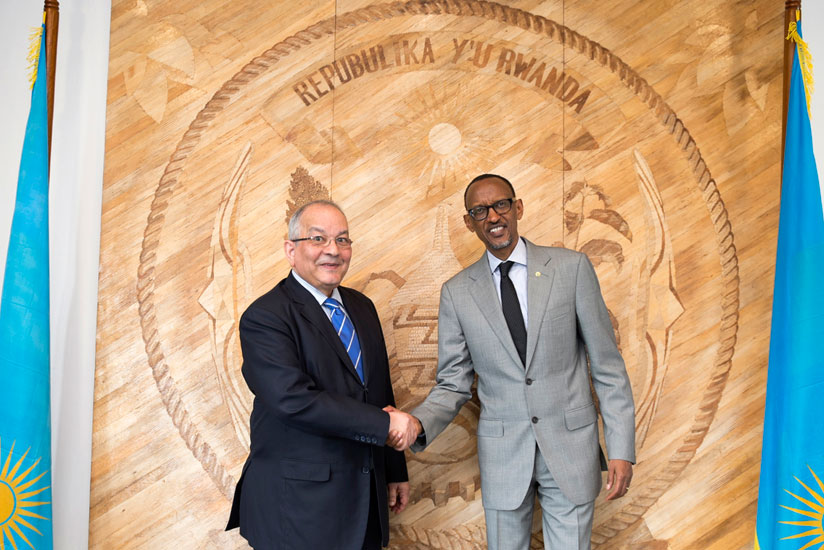 Rwanda will be an inspiration of good governance, regional integration, and conflict resolution for other member countries of the Economic Community of Central African States (ECCAS), the bloc’s Secretary-General has said.

Ahmad Allam-Mi made the remarks  yesterday shortly after meeting President Paul Kagame at Village Urugwiro in Kigali, the diplomat’s first courtesy call to the President since Rwanda was re-admitted to the ECCAS regional bloc in May.

He added: “Despite the difficulties that Rwanda faced in the past, the country has a lot of experience in the area of reconciliation which can be shared in the resolution of conflicts in the central African region, especially in the Central African Republic and we know Rwanda is already helping that country”.

The diplomat also lauded Rwanda for being the beacon of integration and free movement of people in Africa, citing the fact that Rwanda doesn’t require visas for Africans prior to visiting the country.

Since January 2013, nationals from all African countries travelling to or transiting through Rwanda are issued with an entry visa upon arrival at any Rwandan entry point.

“Rwanda has experience in promoting free movement of people and goods because it’s the only African country which receives all Africans at airports and gives them visas. That’s a form of free movement which can encourage regional integration,” he said.

The donation, which was delivered in Kigali yesterday, includes 20,000 non-reflective metallic chalkboards and 2,000 digital pianos for primary schools across the country.

Dr Lee said that his discussions with President Kagame focused on the status of the education sector in Rwanda.

President Kagame also met with Ambassador Dho Young-shi, Chairperson of Un World Tourism Organisation Sustainabe Tourism-Eliminating Poverty Foundatin. Amb. Dhow a sin the country to inaugurate a fourth library as part of the Thank You Small Livrary inistiative designed to contribute to the achievement of universal primary education. The library was inaugurated at Groupe Scolaire Rugando.

Celebrating The Man Kongi And His Gusto to Africa