Plan Underway To End Era of Godfathers in Police 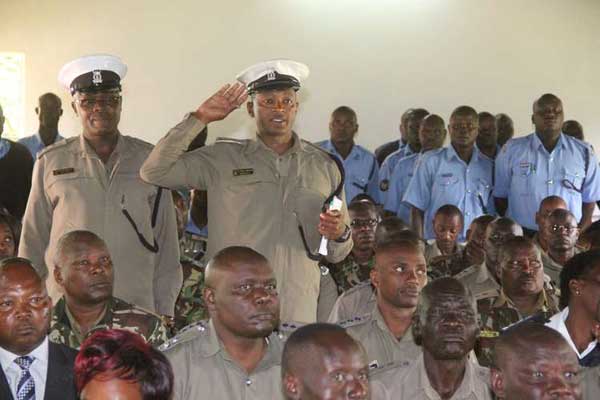 The much-awaited scheme of service that will see police officers promoted automatically after serving for a certain number of years will finally be rolled out next month.

National Police Service Commissioner Murshid Mohamed said with this scheme, cases of an officer stagnating in the same rank for decades because they do not have a godfather to push their case will now be a thing of the past.

“The commission has completed the scheme and Parliament has already approved it, but it will become effective from January 2016,” Mr Mohamed told a sensitisation forum on police vetting in Mombasa on Tuesday.

The scheme will specify the duties of each officer and performance targets that will count in consideration for promotion.

Mr Mohamed said it is in tandem with the regulations of the Salaries and Remuneration Commission.

“The all-inclusive scheme is a clear system of service delivery for all police officers; regular, Administration and all other departments.”

The scheme also contains a raft of recommendations, including allowing officers in the rank of constable to live in rented houses.

“We are also looking at the possibility of building utawala (police) schools in all counties so that children of officers can be guaranteed of education even when their parents have been transferred,” he said.

He said the commission would transform the force to become a prestigious profession. “This will take a bit of time, but it is doable,” said Mr Mohamed.