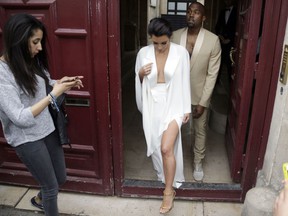 Abbas claims to have been recruited by an alleged criminal mastermind nicknamed Le Pince (Aomar Ait Khedache), when Kardashian was just ‘the wife of an American rapper’

At 2.30 a.m. on October 3, 2016, Yunis Abbas, a 63-year-old French-Algerian, made his way to Paris’s Hotel de Pourtales to rob one of the richest women in the world, Kim Kardashian.

Along with four other men in their 60s and 70s, all dressed as police officers, Abbas, whose elderly conspirators had allegedly cased the joint beforehand, entered Kardashian’s rented apartment and held her at gunpoint. They zip-tied her hands and ankles, dumped her in the bathtub and made off with pounds 7 million worth of jewellery and two mobile phones.

It was a shocking crime, reportedly set in motion after the reality TV star marked her Paris arrival with an Instagram photo featuring a pounds 3.5 million diamond ring.

But a book written by Abbas, who is awaiting trial – reveals just how madcap their audacious plot was. I Kidnapped Kim Kardashian, his recollection of the biggest robbery of an individual in France in two decades, is by turns bizarre and fascinating; it could easily inspire the script for a Hollywood action comedy. Think Taxi meets Heat.

In the book, published today, Abbas describes how within moments of cycling off with his loot he got a flat tire, catapulting him (and his goods) over the handlebars and on to a Paris pavement. A pounds 26,000 pendant was left behind in the confusion; then a phone rang – Kardashian’s, with an incoming call from singer Tracy Chapman.

Abbas tossed the phone into the Canal de l’Ourcq and sped home to face his wife, Farida, prone to chiding him for late returns.

Abbas, now 67, and his four accomplices are all awaiting trial, but he plans to plead guilty to all charges against him. His book was written, he says, to set the record straight, frustrated as he was by his portrayal as “a very uninviting character… It’s sad really”.

He adds he’s proud to have fulfilled the kind of heist “every mobster dreams of” – in spite of claiming he “knew nothing about this girl before taking part in the robbery… I was closed off from the universe of reality TV stars and influencers”.

Abbas claims to have been recruited by an alleged criminal mastermind nicknamed Le Pince (Aomar Ait Khedache), when Kardashian was just “the wife of an American rapper”, who would be in possession of her lavish engagement ring plus jewellery loaned by fashion houses.

According to the book, Le Pince’s “granny and grandpa spies” allegedly conducted multiple reconnaissance missions on Hotel de Pourtales, where they found little security. The communal door – as is common in Parisian buildings with courtyards – was open around the clock.

As for the security cameras, they were mostly a deterrent – after all, this is where high-fliers like Prince, Madonna and Leonardo DiCaprio had stayed to ensure their privacy.

Khedache, who has previously admitted to involvement in the robbery but denies being the ringleader, is awaiting trial.

That night, a network of sources, including a brother of the owner of the car rental firm used by Kardashian and her husband Kanye West, fed the gang live updates on their movements.

By 2 a.m., it was clear that Kardashian was alone. West was on a flight to play at a festival in New York, her sister Kourtney and bodyguard Pascal Duvier were at a club, and Kris Jenner, her mother, had settled in for the night at the nearby Plaza Athenee hotel.

The Difference Between Contingent Workers and Outsourcing

Egyptian Classical, Short Films To Screen at Arab Film Festival in US