NASA’s Mars Helicopter Ingenuity Touches Down on the Red Planet 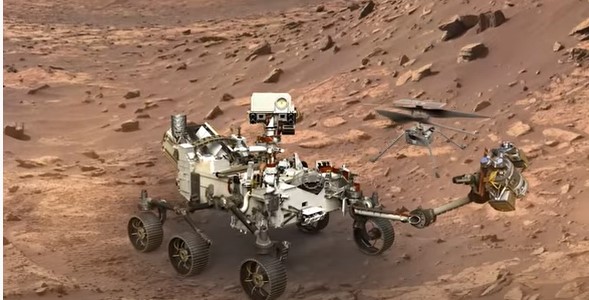 The first helicopter on Mars is officially on Martian soil.

NASA’s Mars helicopter Ingenuity touched down on the surface of the Red Planet after being dropped by its mother ship, the Perseverance rover, the space agency announced late Saturday (April 4). The helicopter’s first flight is just over a week away.

“#MarsHelicopter touchdown confirmed! Its 293 million mile (471 million km) journey aboard @NASAPersevere ended with the final drop of 4 inches (10 cm) from the rover’s belly to the surface of Mars today,” officials with NASA’s Jet Propulsion Laboratory in Pasadena, California wrote in a Twitter announcement. “Next milestone? Survive the night.”

eighing in at just 4 lbs. (1.8 kilograms), Ingenuity is a tiny, solar-powered helicopter that relies on a rechargeable battery to keep its systems warm during the harsh Martian night. Until today, Ingenuity has been attached to Perseverance’s belly, feeding off the rover’s nuclear-powered system to stay warm.

Now, the helicopter is using its internal battery to power a vital heater.

“This heater keeps the interior at about 45 degrees F through the bitter cold of the Martian night, where temperatures can drop to as low as -130 F (minus 90 degrees Celsius),” NASA’s Bob Balaram, chief engineer for the Mars Helicopter project, wrote in a status update Friday (April 2). “That comfortably protects key components such as the battery and some of the sensitive electronics from harm at very cold temperatures.”

Ingenuity is expected to make its first flight on April 11, with the data from that test reaching Earth on April 12, NASA officials have said. The $85 million drone is the first helicopter ever sent to another world and is designed to test technologies for future flying vehicles on other planets. Ingenuity carries two cameras to document its flights, which will also be observed by the Perseverance rover.

f all goes well, Ingenuity will perform a series of ever-longer flights over Jezero Crater (where the Perseverance rover landed on Feb. 18) over the next 31 Martian days, which are called sols. Each flight should reach no higher than 16.5 feet (5 m) and will be conducted over a 300-foot-long (90 m) flight range.

NASA plans a series of tests before that first flight to fire up Ingenuity’s four-rotor blades (they spin at up to 2,537 revolutions per minute) while Perseverance watches from a safe distance. The rover will be stationed a safe 16.5 feet away from the drone before the first flight.

But first, of course, Ingenuity must survive the bitter cold of its first night alone on Mars. The helicopter’s battery will power its heater enough to maintain a steady temperature of about 5 degrees F (minus 15 degrees C).

“The Ingenuity team will be anxiously waiting to hear from the helicopter the next day,” Balaram wrote Friday. “Did it make it through the night? Is the solar panel working as expected?”

Mission team members will closely watch Ingenuity’s temperature and battery performance over the weekend to ensure the helicopter is healthy, Balaram added. If everything looks good, Ingenuity can then move on to its rotor tests and other system checks ahead of the first flight, he said.

As novel as Ingenuity is, the helicopter is just part of NASA’s ambitious Perseverance rover mission to explore an ancient delta in Mars’ Jezero Crater. The rover is expected to spend the next two years exploring the area to seek out signs of ancient life. Perseverance will also collect samples of Mars rocks to be collected and returned to Earth on a later mission.

How Did Africa Escape the Calamity of a Pandemic Covid -19

How Kenya is Harnessing the Immense Heat from the Earth

NASA’s $2.2bn Perseverance LANDS on Mars: Rover survives ‘seven minutes of terror’ to embark on 2-year mission to search for extra terrestrial life in crater that was once a lake