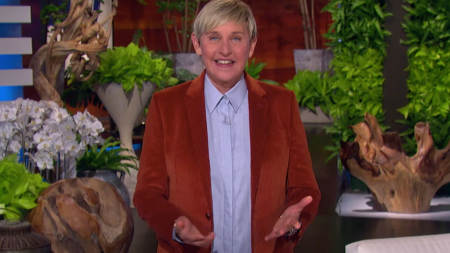 Ellen Degeneres, seen in the press room during the 2017 People’s Choice Awards, announced she will end her show in 2022.

TV host Ellen DeGeneres is pulling the plug on her successful daytime TV variety/comedy/talk show at the end of this season. For more than 18 years, she has famously danced with her guests and the audience, played games and pranks with them and given away prizes. She has interviewed everyone from Hollywood A-listers to precocious children. But now, she and Warner Brothers Television have said The Ellen DeGeneres Show will end in 2022.

“When you’re a creative person, you constantly need to be challenged,” DeGeneres told The Hollywood Reporter in an exclusive interview, “and as great as this show is, and as fun as it is, it’s just not a challenge anymore.”

She’ll be talking about her decision on her show today. And tomorrow, she’ll sit down with friend and guest Oprah Winfrey to talk some more.

“Although all good things must come to an end, you still have hope that the truly great things never will,” said Mike Darnell, the president of Warner Brothers Unscripted Television, in a statement. He said DeGeneres’ show “started as the little program that could and became an absolute phenomenon. Over the years, it established itself as the premiere destination for both superstars and incredible heartfelt human interest stories. The show and Ellen brought comedy, joy, happiness, comfort (and dancing!) to countless millions every day for 18 years. It was and is an indelible piece of the television landscape, and it will be sorely missed.”

The standup comedian began her talk show in 2003, five years after coming out on her sitcom, Ellen, and announcing on the cover of Time Magazine: “Yep, I’m Gay.” For that, President Barack Obama bestowed on her the Presidential Medal of Freedom. She’s won the Kennedy Center’s Mark Twain Prize for American Humor, and her television show has earned daytime Emmy awards.

“In sharp contrast to her public image as everyone’s good friend, happy to listen, she presents herself — with tongue in cheek — as cartoonishly aloof and indifferent, stuck in a privileged bubble, cracking several jokes, for instance, about her fabulous wealth,” The New York Times wrote in a profile of DeGeneres. In the article, her wife, actress Portia de Rossi, encouraged her to move away from her talk show. “I just think she’s such a brilliant actress and stand-up that it doesn’t have to be this talk show for her creativity,” de Rossi said. “There are other things she could tackle.” But DeGeneres said her brother, and Warner Brothers executives, urged her to stay on, saying the audience needed her positivity on TV every day. She signed a new contract.

But last year, former and current staffers who remained anonymous claimed that the show was a toxic workplace. They told Buzzfeed they experienced racist comments, fear and intimidation on set, and some alleged they were sexually harassed by the show’s producers. WarnerMedia investigated, and fired three of the show’s executive producers and the head writer. DeGeneres, who based her persona on urging people to “be kind,” apologized to her staff. In a memo, she wrote that “she intended for her show to be a place where ‘no one would ever raise their voice, and everyone would be treated with respect.”

She opened her 18th season in September with an apology to her audience. “I learned that things happened here that never should have happened. I take that very seriously,” she said. “I know that I’m in a position of privilege and power, and I realize that with that comes responsibility, and I take responsibility for what happens at my show.”

DeGeneres said the show was starting a new chapter. “My intention is to always be the best person I can be. And if I’ve ever let someone down, if I’ve ever hurt their feelings, I am so sorry for that. If that’s the case, I have let myself down and I’ve hurt myself as well because I always try to grow as a person. I look at everything that comes into my life is an opportunity to learn. I got into this business to make people laugh and feel good. That’s that’s my favorite thing to do that. And Jinga.”

Warner Brothers says DeGeneres will still continue on Fox’s The Masked Dancer, NBC’s Ellen’s Game of Games and HBO Max’s Ellen’s Next Great Designer. Her Ellen Digital Ventures includes more than 60 original series, including Momsplaining with Kristin Bell. She is also producing documentaries and specials for Discovery, and according to The Hollywood Reporter, she is hoping for more acting roles and time for her conservation efforts.