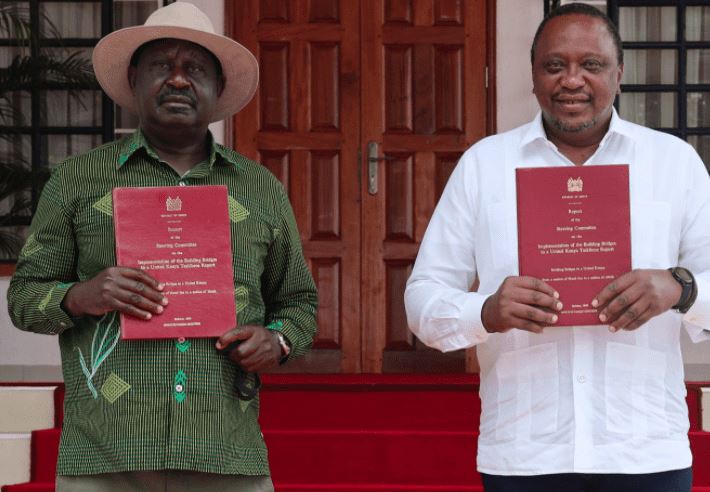 The push for constitutional review entered the homestretch on Tuesday after Senate overwhelmingly passed the Constitution of Kenya (Amendment) Bill, 2020 setting stage for the two last steps.

The Senate essentially forwarded the Bill to voters to make the final decision at a referendum expected to be scheduled soon by the Independent Electoral and Boundaries Commission (IEBC).

The House attained a rare two-thirds majority after 51 senators voted in support of the Bill, 12 voted against while nominated Senator Mary Seneta abstained.

BBI secretariat co-chair Dennis Waweru said Parliament has now paved the way for a referendum on the Bill and proved that the process is people-driven despite a few dissenting voices.

“The overwhelming vote for BBI in the National Assembly and the Senate yesterday, demonstrates Kenyans’ desire for a more inclusive, democratic and progressive society. For a long time, there were those who doubted the Handshake between President Uhuru Kenyatta and ODM leader Raila Odinga, it came to be and changed our politics then. We collected more than three million signatures for the BBI Bill,” said Waweru.

He said the overwhelming vote for the Bill by the county assemblies and both Houses was a clear indication to the naysayers that the initiative by the President and Raila was popular.

“We did this amid talk of certain individuals boasting big numbers, but when the real-time to vote came, the numbers were nowhere to be seen,” Waweru told The Standard on Tuesday.

The BBI secretariat co-chair maintained that Kenyans will not be distracted in their pursuit of a just and democratic society, adding that the next verdict will be delivered through a referendum.

“The game of numbers is known when people stand to be counted and not in some backroom calculations or chest-thumping in public. We have proved time and again that we have the overwhelming majority on our side, those who want a cohesive nation ready to face future challenges with courage and determination. The numbers don’t lie,” he said.

Earlier, Senate Speaker Ken Lusaka ruled out amendments to the Bill, saying this would negate the will of the people.

Several senators had demanded to have the document amended before it is approved by the House for onward submission to the President, who will subsequently forward it to the IEBC.

Siaya Senator James Orengo, who had demanded an amendment to the Bill, said the debate by the House was for posterity of the country.

“For those who misunderstood us out there, I just wanted to emphasize the committee recommended that the Bill be passed without amendments,” he added.

The Libyan Political Dialogue Forum Elects Muhammad Yunus Al-Manfi As President Of The Presidential Council And Abdel-Hamid Dabaiba As Prime Minister In The Second Round Of Voting.