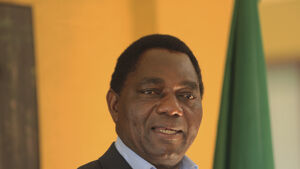 Veteran Zambian opposition leader Hakainde Hichilema appears on the verge of clinching the southern African country’s presidency, with a commanding lead in votes.

The 59-year old businessman, contesting the presidency for the sixth time, has more than 2.3 million votes to President Edgar Lungu’s 1.4 million votes, according to results announced by the Electoral Commission of Zambia.

The winner of the election held Thursday must garner more than 50% of the votes cast to avoid a second round of voting and Mr. Hichilema appears close to the 2.5 million estimated to be more than half of those who voted.

The electoral commission has announced results for more than 100 of the country’s 156 constituencies.

“With victory in sight, I would like to ask for calm from our members and supporters.

“Let us be the change we voted for,” tweeted Mr. Hichilema, whose United Party for National Development is in an alliance with more than 10 smaller parties.

Celebrations by his supporters spread across the capital, Lusaka, and other parts of Africa’s second-largest producer of copper, ignoring calls by the Electoral Commission for people to wait peacefully for the final official results.

Some of the 16 candidates who ran for president have already conceded defeat and congratulated Mr. Hichilema.

But President Edgar Lungu has signaled that he may not accept defeat.

Mr. Lungu asserted that the elections had not been free and fair in three provinces seen as opposition strongholds, citing violence and the killings of a few of his supporters, allegedly by the opposition.

Mr. Lungu claimed that ruling party polling agents had been brutalized and chased away from voting stations, leaving his party’s votes “unprotected”.

Mr. Lungu said Saturday that although he notified the electoral commission of his concerns, “they have continued announcing the results”.

His Patriotic Front party is “consulting on the next decision we have to make”, he said in a statement released by his office.

Mr. Lungu’s statement indicates that he may challenge the validity of the election in order to stay in power, said analysts.

The overwhelming turnout of voters, particularly of youthful Zambians, was a strong indication that Mr Hichilema was going to do well in the poll, according to analyst Nic Cheeseman, professor of politics at the University of Birmingham, who is in Zambia to watch the crucial election.

Youthful voters make up a majority of registered voters.

The electoral commission noted that the large turnout was unprecedented. 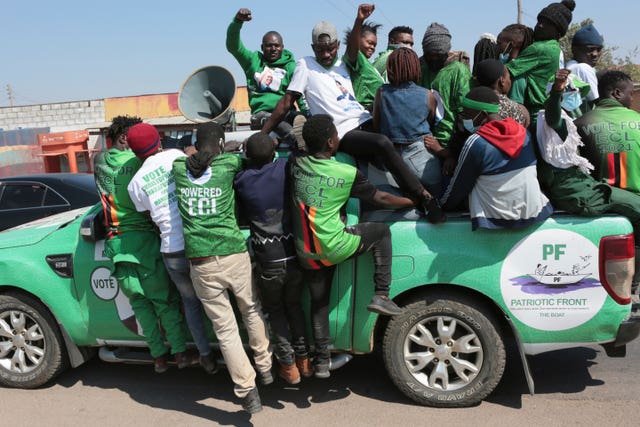 For some of Mr. Lungu’s supporters, this is more than just a defeat at the ballot box.

In a country where a large number of youths are unemployed, many of Mr. Lungu’s supporters, from the wealthy to the poorest, have relied on patronage and fear losing access to jobs.

Although not directly related to the president, his association with the ruling Patriotic Front allowed him to run a car park and car wash business.

“I am now an orphan, I have lost a father,” he said, anticipating a defeat for Mr. Lungu as he sullenly watched Mr. Hichilema’s supporters dancing to loud music at a popular eatery where he charges five kwacha (about 30 cents) for parking spots.

Mr. Hichilema’s UPND officials say it is a practice they plan to eradicate, noting the money going into the pockets of the politically well-connected should instead be channeled to government institutions.

Mr. Hichilema’s supporters seem to have other ideas though.

As results came in thick and fast Sunday following the tense, hard and sometimes violently fought election, his backers say they are preparing to take over these small-scale operations.

“We are taking over the markets and bus stops!”

Watch out for one on one with Nigeria National confab delegate