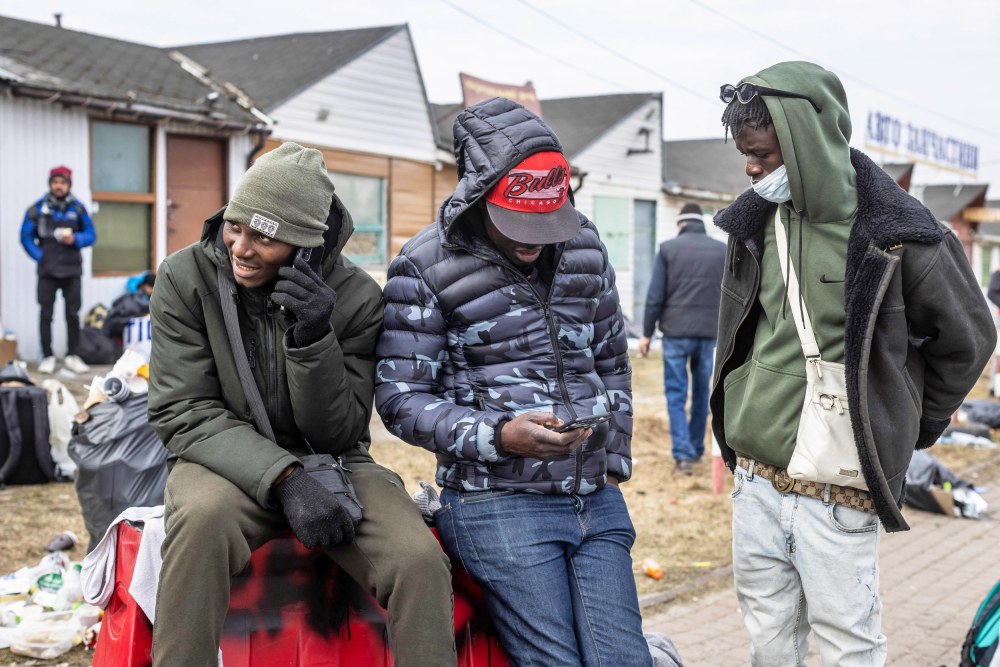 Refugees from many countries and continents — from Africa, the Middle East and India — most of them students at Ukrainian universities, wait at the Medyka pedestrian border crossing in Poland on Feb. 27.Wojtek Radwanski / AFP via Getty Images

Tolulope Osho, 31, reached the Polish border the day after Russia invaded Ukraine. He was close to safety from the war-torn land. But he decided to turn around.

“I have friends,” he said of his fellow Africans in Ukraine. “If by leaving my valuables, I can save more lives, then I’m doing it. Life is more important.”

Osho, who’s from Nigeria, returned to Ternopil, in western Ukraine, where he’s remained in a safe zone for the past week. He’s helped shelter people in underground bunkers, driven them to borders and provided money through a fundraiser. In all, he said he and a friend have aided some 200 people.

‘As long as you are Black, no one likes you’: Students allege racism during escape from Ukraine

He said he’s relied heavily on Instagram, where people across the country have reached out to ask for money and transportation.

“I navigate people who don’t know how to get out of the war zone,” he told NBC News, adding that he has helped people reach the Ternopil safe zone, “then to the border. I even buy them train tickets and pay for transportation.”

Organizations like the Lviv Center for Urban History, Fight for Right, BOCTOK-SOS and the Urgent Action Fund for Women’s Human Rights are providing everything from food and transportation to shelter for those fleeing the conflict. And Osho is one of several Africans helping in these rescue efforts, often sharing information online using the hashtags #AfricanInUkraine and #BlackInUkraine. Along with Osho, a trio of women, Korrine Sky, Tokunbo Koiki and Patricia Daley, are among those who have stepped up to help Africans stranded in the country or desperately trying to flee. The women formed Black Women for Black Lives, and provide Africans and Caribbeans in the area with information on the safest routes through areas where they might face discrimination while trying to flee.

Ukraine has become a popular choice for African students, who now account for nearly a quarter of the more than 76,000 foreign students in Ukraine, according to the BBC, which cited government data for its report. While the official count of African and Black people in Ukraine has not been updated in 20 years, Reuters reported that there were more than 16,000 African students in the country, citing figures from the education ministry.

Ukraine is also home to about 20,000 Indian students, who have also reported discrimination and hostility in trying to escape since the invasion, according to the BBC, which referred to government data.

Russia invaded Ukraine more than a week ago, by land, air and sea, following weeks of tension, sending thousands to various borders to evacuate the country. African citizens living in Ukraine have reported incidents of racist discrimination and abuse at the border, which can include beatings, being denied entry to trains or being left stranded in border towns.

Representatives from several African governments — Nigeria, Ghana, Kenya and Gabon — have condemned the reports, and the African Union said earlier this week that it was disturbed by the news. Filippo Grandi, the U.N. high commissioner for refugees, acknowledged at a Tuesday news conference the discrimination some non-Ukrainians had faced at the border. He said that unfair treatment wasn’t the result of state policies.

Sky, Koiki and Daley have never met in person, but the network of aid they have set up for Black people in need in Ukraine could reach thousands. The women started the Black in Ukraine group chat on Telegram, a messaging app, which has made it possible for more than 4,500 Black people in the country to communicate and coordinate with one another for such necessities as shelter and transportation. After raising at least $40,000 in a pair of PayPal fundraisers, the group launched a GoFundMe campaign, encouraging people around the world to donate to help Black people still in Ukraine as well as those who have escaped.

Black Women for Black Lives began with Sky, 26, who was a second- year medical student in Dnieper. She, her husband and two others frantically grabbed whatever they could and left to find safety when Russia began its attack on the country. Sky, who is Zimbabwean, described her harrowing journey from Dnieper to her home in England. Sky said that what should have been a nine-hour journey to Lviv to board a train to a border town on the outskirts of Ukraine ended up taking 24 hours because of traffic and Ukrainian officials stopping the group nearly 10 times to check their documents.

The four were initially headed to the Polish border but had heard from peers that Black people at the border village of Medyka had faced severe racism. So Sky and the group decided to seek refuge in Romania, but treatment there was no better. Sky said just before they could cross the border into Romania, she and her fellow Africans were told to leave the line. They were then told to go to a separate line, where she said they stood for at least nine hours.

Ancient Pharaoh Reveals Secrets after his Mummy is ‘Digitally Unwrapped