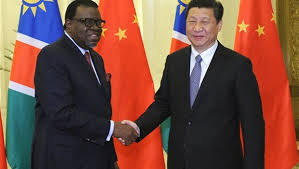 Chinese President Xi Jinping yesterday met Prime Minister Hage Geingob who is on a state visit to Beijing, and the two leaders pledged to boost cooperation between the two countries.

Describing Namibia as an “all-weather friend” of China in Africa, Xi said the two countries should “carry forward the undertakings of their predecessors and open up a new road for the future” to lift their bilateral relationship to new heights. The two countries should enhance political interactions and continue backing each other on major issues, Xi said. He added that the Chinese government supports capable and credible enterprises to cooperate with Namibian partners in mining, agriculture, infrastructure, manufacturing and other sectors, especially on large-scale projects. Applauding China’s long-standing support for Namibia, Geingob said the country looks forward to closer cooperation with China in Namibia’s drive for development. Namibia will create a favourable environment for Chinese investment, said the prime minister.

Xi said Africa is undergoing a period of “economic take-off” and expressed confidence in the continent’s development.

It is an important cornerstone of China’s foreign policy to cooperate with African countries, Xi said, and this “will not change with China’s development and the elevation of its status in the world.” Xi said China upholds a correct view on morality and interests in its cooperation with Africa and will continue to help African countries to strengthen their capabilities in self-driven development.

Geingob said China has been sincerely assisting Africa, adding that Namibia is ready to make more contributions to the development of the Africa-China relationship
– See more at: http://www.namibian.com.na/indexx.php?id=11577&page_type=story_detail&category_id=1#sthash.BydZIvo0.dpuf

The battle of political supremacy in Ekiti gubernatoria