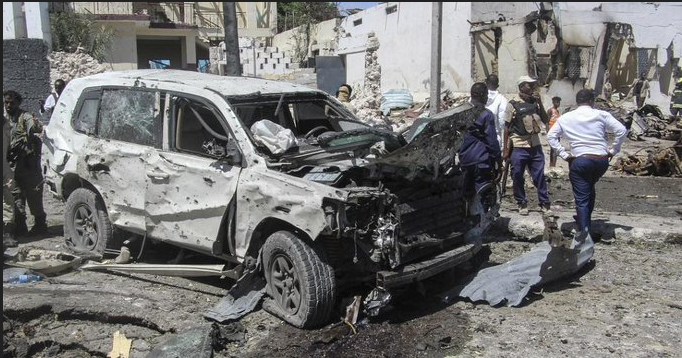 On Thursday, a blast near a presidential palace checkpoint left six dead and injured at least 10 in Mogadishu.

The Somali capital was hit by a deadly suicide bombing, on Thursday. The provisional toll records six dead and at least 10 injured. Preliminary observation suggest that the presidential palace was targeted. The blast happened at a restaurant bordering the clinic and near a security checkpoint leading to the President’s residence in Mogadishu.

Many in the densely populated area witnessed the blast. “A loud explosion rocked here unexpectedly, Nageye Hussein recounts. The suicide bomber was pushing a wheelbarrow, several people were killed here […] It was a big tragedy. The big explosion caused civilian casualties, that was a tragic one

Security official Abdullahi Muktar told AFP “the incident is still (being) investigated to know the exact details but preliminary observation we have indicates that someone carried out the blast.”

Mogadishu has seen a spate of attacks and in early January, Mohamed Ibrahim Moalimuu, the government spokesman was wounded in an attack.

The country has engulfed in a political crisis caused by long-running disagreements over delayed elections. Somalia’s elections follow a complex indirect model, whereby state legislatures and clan delegates pick lawmakers for the national parliament, who in turn choose the president.

Voting for the upper house concluded last year, while clan delegates have so far elected around 40 percent of the 275 MPs who sit in the lower house. Somalia’s President, Mohamed Abdullahi Mohamed, and Prime minister Mohamed Hussein Roble have been at loggerheads over the process

The electoral impasse has worried Somalia’s backers, who fear it distracts from the battle against Al-Shabaab, the Al-Qaeda-linked jihadist group which has been fighting the central government for over a decade.

Huge Explosion Kills Many in Ghana