Many have died in an explosion that occurred at Appiatse between Bogoso and Bawdie in the western region of Ghana on Thursday ( 20th January 2022 ) afternoon.

An eyewitness account states: “It is as if we are in a war-torn country.” buildings and other structures were destroyed following the explosion.

The Police in collaboration with other emergency service providers, have “activated a full emergency recovery exercise.”

Preliminary investigations, according to the Police, revealed that “a mining explosive vehicle moving from Tarkwa to Chirano mines collided with a motorcycle resulting in the explosion.”

According to local media, men from the Ghana National Fire Service GNFS were seen conveying what appeared to be bodies out of the rubble.

“Most of the victims have been rescued and are on admission at various hospitals and clinics within the Bogoso Municipality,” Police say.

In a Facebook post, the Police urged all residents to remain calm as “we manage this unfortunate situation.” 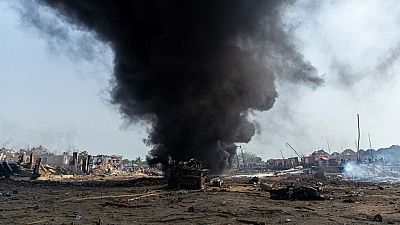