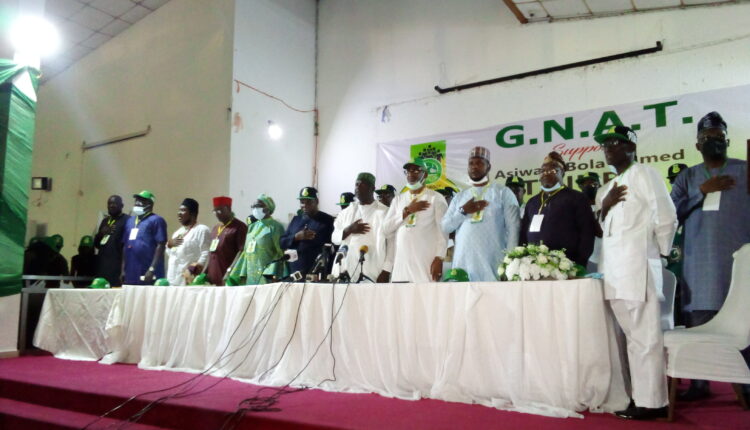 The group stated that their support was a way to show their appreciation for what Tinubu has done for them  as a father and a leader throughout his administration of governance, adding that  it is their utmost aim to ensure that they canvass massively to fulfill his presidential aspirations through the grass root levels particularly.

They further expressed utmost optimism that Tinubu would win the Nigeria 2023 general elections because of his robust capacity and tenacity which will lead the country to the desired development for all and sundry, adding that the legacies of Tinubu in Nigeria politics was a clear indication that he is want Nigeria needs as a leader. 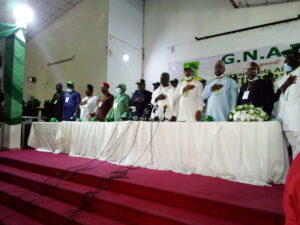 Speaking  to The Guild Correspondent during a press conference in Lagos, on Wednesday, GNAT Chairman, Abiodun Mafe, said that the aim of the group was centered on ensuring that Tinubu, who had recently declared his presidential aspirations would get all the necessary votes to secure his victory in 2023 general elections, noting that the group have started canvassing for him throughout the federation.

” The aim of this group is to gather support for Tinubu’s presidential aspirations come 2023. We are already working with 774 Local government areas, (LGAs) and LCDAs across the federation so that all our members and political office holders will push this movement. We’ll work throughout the federation to gather support for him so that he gets the party’s ticket. We are the political tools. we are the soldiers and we are going to work judiciously for him.” he said.

Also, Mafe, said that the decision of the group to stand for Tinubu revolved around his distinctive abilities, robust influence  and particularly his capability to hold the position as the first citizen of Nigeria, adding that they would make use of resources, support and influences available to them to ensure that he wins the election.

“Based on his robust influence, capability and capacity; we have collectively decided to give our support to the presidential aspirations of Tinubu. We will gather every resources and influences to ensure he wins the presidential primary of our great party, APC and the 2023 general elections. We are fully prepared to work extensively to mobilize and gather votes for him.”  he added.

On his part, the former Anambra  governorship aspirant under All Progressives Grand Alliance, (APGA), Roni Okoye, who had joined the APC said that Tinubu represented the grass root which makes him the right man to take the presidential position,  stressing that the former governor does not consider tribal or cultural sentiments in dealing with people.

“I thank the Yoruba nation for the gift of Tinubu. He is a courageous and a fearless leader. He has built individuals and nations beyond Nigeria. We saw the massive support of the grass root for Tinubu and we know he is the man for the people, to move the country forward. He is the man that can development for Nigeria. He looks beyond tribal or cultural sentiments. We are here to show our support across the Niger.” he said.

On her part, the Chief Executive Officer, Sustain Environ Limited, Nike Ajagba, commended Tinubu’s administration for his competent and visionary abilities, noting that Nigeria would be privileged to have a leader who above all things has maintained strongly his integrity.

“We are privileged to have a leader who has a vision and who has a mission. I have found a man of visionary, connectivity and competency. Tinubu has been prepared and tucked with enough political experience to lead the Nigeria. You don’t find men of integrity at all times on the corridors of power but Tinubu is that man of integrity” she said.

Also, the APC leader in Delta State,  Ogenekaro Benson, expressed his support to mobilize the South South region on behalf of Tinubu to win the presidential election, adding that Tinubu is the man to make Nigeria a  peaceful nation  as he has done in Lagos.

“Nigeria is lucky to have Tinubu. He is a man with a big heart. We are going to work for him because we know he is a man who has good plans for Nigeria. If Lagos as populous as it is, can be peaceful then he can make Nigeria peaceful. Most of us from the south south joined APC because of  Tinubu and the good works he has been doing in Nigeria politics.” he said.

Tinubu’s biography distinguishes between a leader and a manager. Some managers are great, but they can only accomplish set goals. A leader of this sort is a visionary, who turns ideas into a soup of charisma to stamp a profound, if revolutionary change on a generation. That was the difference between Awo and Akintola, between Mandela and Mbeki, Between Churchill and Macmillan, between Washington and Adams, etc. After Charles De Gaulle left office, one of his cabinet ministers said the “story of De Gaulle is in his legend.”

By declaring to run for president, Tinubu is offering himself as a Lagos original. If no one can deny that Lagos is the best–run state in the nation by a mile, then, no one should look askance at an opportunity to rewrite Nigeria on a national scale

‘Jide Adesina the coordinator of GNAT Global wrote from US that Tinubu’s mission is to embark on something audacious, proposing that the national government has an obligation to provide an economic safety for its citizens, to protect them from the unpredictability of the economy, terrorists, and ethnic agitators. also, to make bold intervention in commerce, stock markets, education, healthcare, jobs for youth and social welfare for all, I think the hallmark of this group on the campaign trail is to address the circumstances at hand, but also give people some hope.

THE UNVEILING OSINBAJO … IF EMPOWERED

Huge Explosion Kills Many in Ghana