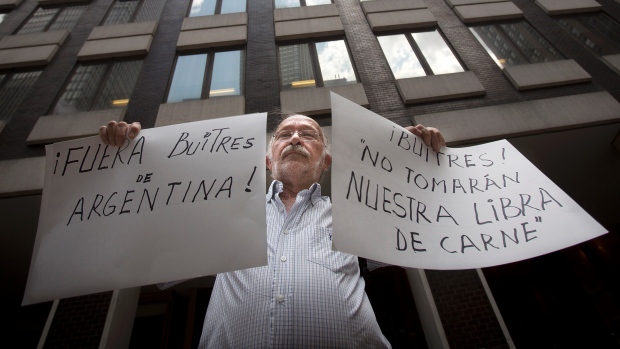 Talks aimed at averting Argentina’s second default in 13 years ended with bitter recriminations Wednesday as the South American country said it could not accept a deal with U.S. hedge fund creditors it dismisses as “vultures.”

Argentine Economy Minister Axel Kicillof emerged from a meeting with creditors and a court-appointed mediator with an air of defiance, saying his government could find no middle ground ahead of a midnight deadline that automatically triggers a default on $539 million in interest payments.

Kicillof said the U.S. hedge funds demanding a $1.5 billion payment on outstanding Argentine bonds had refused a compromise offer as well as requests to agree to a stay of a judge’s order that would have allowed the interest payments to be made on time and avert what is likely to create great economic uncertainty for investors and citizens of the South American country.

Court-appointed mediator Daniel Pollack said the failure of the talks trigger an immediate default that, among other things, will hurt bondholders who were not part of the dispute as well as the Argentine economy.

“The full consequences of default are not predictable but they are certainly not positive,” Pollack said. 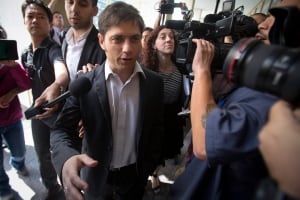 Argentina’s economy minister, Axel Kicillof, was in New York on Wednesday to try and strike a last-minute deal, but it appears no agreement was reached. (Carlo Allegri/Reuters)

​Kicillof repeatedly referred to the hedge funds as “vultures” in a lengthy news conference and he dismissed a decision by ratings agency Standard & Poor’s to downgrade the country’s foreign currency credit rating to “selective default” because of the missed interest payments.

“Who believes in the ratings agencies? Who thinks they are impartial referees of the financial system?” he said.

Argentina’s President Cristina Fernandez has long refused to negotiate with the U.S. hedge funds, who spent more than a decade litigating for payment in full rather than agreeing to provide Argentina with debt relief.

The hedge fund investors are demanding that Argentina make full payment on debt that it defaulted on in 2001, even though the investors bought rights to that debt at less than face value. Unless Argentina does so, a U.S. court blocked it from making the interest payment owed to bondholders who separately agreed to a restructuring plan with the country.

Earlier Wednesday, Argentine bonds surged to their highest level in more than three years on the possibility that Argentina would have reached a deal with the holdout creditors by the midnight Wednesday deadline. Argentina’s Merval stock index also climbed more than 6.5 percent in midday trade on a likely deal.

A deal had seemed more likely with news that representatives of Argentina’s private banks association, ADEBA, were set to offer to buy out the debt. In return, the court would allow Argentina to make a $539 million interest payment to other bondholders before midnight, which would allow the country to avoid default.

But that deal failed to materialize by late Wednesday.

For years, the Argentine government has called the hedge fund creditors “vultures” for picking on the carcass of its record $100 billion default in 2001. But the mediator said the two sides were making “a frank exchange of views and concerns,” although he warned that divisive issues remained unresolved.