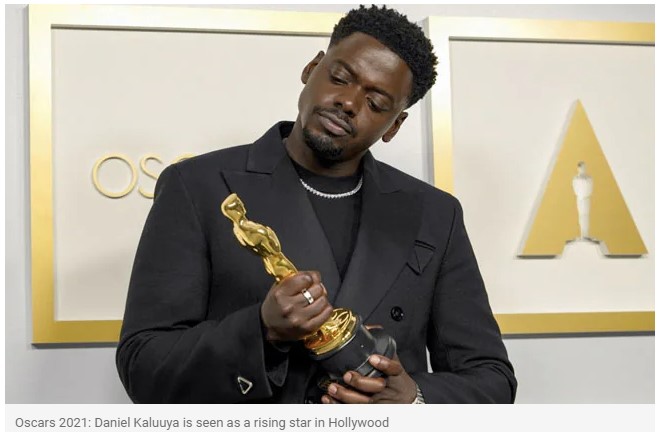 The Oscar for supporting actor went to Daniel Kaluuya for his role in “Judas and the Black Messiah” at the 93rd Academy Awards on Sunday night. This was Kaluuya’s second nomination; he had been previously recognized for his role in 2017’s “Get Out.”

Kaluuya was in the unusual position of competing against his costar in the movie, LaKeith Stanfield, also nominated for supporting actor. This was the 20th time in Oscar history that multiple performers from the same film have been nominated for supporting actor, but the first for two Black actors. Kaluuya is also the first Black actor to win competing against a costar. Of the 19 previous showdowns, only six resulted in a win for one of the nominated costars.

In “Judas and the Black Messiah,” Kaluuya plays Fred Hampton, the young, charismatic leader of the Illinois Black Panther Party who was killed by police while at home in Chicago on Dec. 4, 1969. Directed by Shaka King, the film explores the dynamic between Hampton and William O’Neal (Stanfield), the head of his security detail who was also an FBI informant and instrumental in the raid that took Hampton’s life.

In a speech that immediately became the stuff of Oscar legend, Kaluuya began by saying, “To chairman Fred Hampton. What a man, what a man. How blessed we are they we lived in a lifetime that he existed. Thank you for your light. He was on this earth for 21 years, 21 years and he found a way to feed kids breakfast, educate kids, give free medical care, against all the odds.

“He showed me, he taught me,” Kaluuya said. “Him, Huey P. Newton, Bobby Seale, the Black Panther Party, they showed me how to love myself. And with that love they overflowed it to the Black community and then to other communities. And they showed us the power of union, the power of unity. That when they played divide and conquer, we say unite and ascend. Thank you so much for showing me myself.

“There’s so much work to do guys, and that’s on everyone in this room, this ain’t no single man job. And I look to every single one of you, you got work to do,” Kaluuya continued. “And I’m gonna get back to work Tuesday morning, because tonight I’m going up. We’re going up. Gonna enjoy myself tonight. We gotta celebrate. We gotta celebrate life. We’re breathing, we’re walking, it’s incredible. Like it’s incredible. My mom met my dad, they had sex. It’s amazing, you know what I’m saying, I’m here. I’m so happy to be alive, so we’re going to celebrate that tonight. I appreciate every single person in the room, I appreciate everyone watching at home. Love. Peace, love and onwards.”

Kaluuya was also a winner for the role at the Golden Globes, BAFTAs and SAG Awards.

Aside from Stanfield, also nominated in the category were Sacha Baron Cohen, with his first acting nomination for “The Trial of the Chicago 7″ (he’s also a screenwriting nominee this year for “Borat Subsequent Moviefilm”); Leslie Odom, Jr., also nominated for original song for “One Night in Miami”; and Paul Raci for “Sound of Metal.”

1939  Hattie McDaniel for Gone With the Wind

1963  Sidney Poitier for Lilies of the Field

1982  Louis Gossett, Jr. for An Officer and a Gentlemen

2006  Forest Whitaker for The Last King of Scotland

2011  Octavia Spencer for The Help

What follows on this page are the other Black performers who have been Oscar nominated. To date, 50 Black actors have been nominated for (acting) Academy Awards.

Besides the 14 Black actors who have won Academy Awards (some nominated more than once), the following Black performers have been nominated as actors.

1958  Sidney Poitier for The Defiant Ones

1959  Juanita Moore for Imitation of Life

1969  Rupert Crosse for The Reivers

1984  Adolph Caesar for A Soldier’s Story

1985  Whoopi Goldberg for The Color Purple

1985  Oprah Winfrey for The Color Purple

1985  Margaret Avery for The Color Purple

1986  Dexter Gordon for Round Midnight

1992  Jaye Davidson for The Crying Game

1999  Denzel Washington for The Hurricane

2008  Taraji Henson for The Curious Case of Benjamin Button

2012  Quvenzhane’ Wallis for Beasts of the Southern Wild

Denzel Washington has received the most nominations – an impressive six!