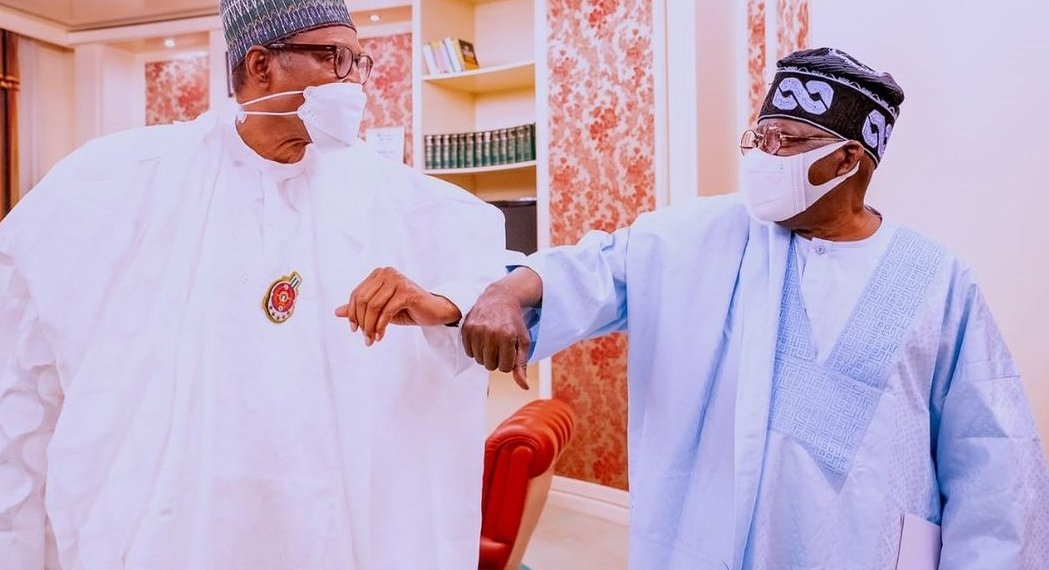 A week after the Director-General, Tinubu Support Groups and former House of Representatives member, Abdulmumin Jibrin, disclosed that former Lagos State governor and National Leader of the All Progressives Congress (APC), Asiwaju Bola Tinubu, will be contesting in the 2023 Presidential election, The 1st Afrika gathered last night that he had informed President Muhammadu Buhari of his aspiration, to which the President reportedly asked him to go ahead

A week after the Director-General, Tinubu Support Groups and former House of Representatives member, Abdulmumin Jibrin, disclosed that former Lagos State governor and National Leader of the All Progressives Congress (APC), Asiwaju Bola Tinubu, will be contesting in the 2023 Presidential election.

The APC leader also said he has informed President Muhammadu Buhari of his ambition to contest the 2023 presidential election. Tinubu, who  spoke with State House correspondents after a meeting with President Buhari at the Presidential Villa in Abuja, said he has the confidence, vision and capacity to build on the foundation laid by the President.

Besides, the former Lagos State governor said he was at the State House to see the President on general issues concerning Nigeria, including some of the concerns in the APC as well as security issues.

He, however, declined to comment on the presidential ambition of Vice-President Yemi Osinbajo and Governor Yahaya Bello of Kogi State, saying he would rather prefer to discuss issues instead of individuals

Asked whether he has informed President Buhari of his ambition to contest for the 2023 presidential election, he said: “I answer that with categorical yes. I have informed the President of my intention but I have not informed Nigerians yet.

“You’ve got that truth from me that I have informed Mr. President of my ambition, and you don’t expect more answers than that.”

“So, why do I expect him to say more than that? You are running a democratic dispensation, and you must adopt the principles and the values and the virtues of democracy. That’s it.”

“I must discuss myself. I have the confidence, the vision, the capacity to rule, build on the foundation of Mr. President, and turn Nigeria better.

“I have done that with unyielding commitment in Lagos State. You’ve seen that experience and the capacity to turn things around and that is what we are doing. You know, the confusion, the drift of the past in PDP (Peoples Democratic Party) is being corrected and you can’t take away from that.

“As we are today, go back to the data on how many barrels of oil we were producing when we first came in and what it is today. We could not, even at the time we came in, pay the counterpart funds to start our rail line.

“Today, you enjoy the comfort of having rail from Lagos to Ibadan, you have the Kaduna and you have the one for Kano State on the aggressive pipeline, you see excellent infrastructure.

“I just came from Azare and I have seen good roads, the carnage of dying in motor accidents is reducing, except you know lack of compliance with a lot of Nigerian drivers and VIOs.   Let us think back, let us be intellectually inquisitive as to the past and the present and what the future holds for Nigeria.”

Explaining his visit to State House, the former Lagos State governor said: “I will not answer that question when I have not lost my citizenship. I came to see the President on general issues concerning Nigeria, including our political party, APC, security issues, the achievement and the New Year Agenda. That’s all I can tell you and the new strategy that we must have party congresses.”

On what Nigerians should expect from him as a president, he simply responded, “You want my manifesto now? Not yet, not yet.”

Controversy over direct and indirect primaries

On his position on the controversy over direct and indirect primaries, the APC chieftain said: “First, the National Assembly and the President must be encouraged to review and review again. Whatever they come up with in the Electoral Act amendment bill is what we must comply with.

“There is no unlimited elasticity in what we face, because we have to plan and plan well, and manage the time effectively. The great roadmap to success is ability of a leader to do what he must do at the right time that it should be done.”

I’m a kingmaker that wants to become king

“So, whatever is your attribute is your opinion. As for me, I want to pursue my ambition without the title of a kingmaker. You can write your literature and your story based on your own perception.”

On the party conducting its convention, he said: “I’m not a spokesperson for the party; the President is the leader of the party. So, expect convention, maybe if that’s added to your anxiety, or the other party’s anxiety, it is good for us. We get it and we’ll get it done properly.”

THE UNVEILING OSINBAJO … IF EMPOWERED